Nowadays it is rare to find professionals engaged in both orderly and functional mounting of technical devices.
You'll agree that when you purchase expensive and elegant devices it is not nice to see a bunch of bulk cables and different sorts of plugs behind them.
It seems hard to find somebody who has time and appropriate knowledge for this particular type of job. Salesmen's main concern is obviously to sell as much as possible and to try to be very convincing. On the other hand, even many architects share that view.
That way the devices look very nice until they are connected, but in the end misguided clients are left without right kind of solution, and even if they find it, the price of the subsequent intervention is extremely high.
The worst thing in such cases is that clients were led to believe that they had already paid everything, including the aesthetic mounting and programming of their devices.
To sum it up, there are no successful solutions without good preparation and organization.
Just like in everything else, the one who doesn't pay for something right away, will definitely pay later (but much more).

Several pictures together with the descriptions will hopefully help you understand even better the essence of this issue. 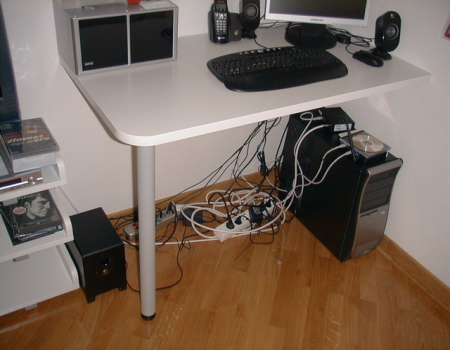 This is how one table looks like when both the architect and the carpenter finished their jobs. There are many messy looking scattered cables together with the rest of the clutter, so very often it happens that the internet isn't working just because some of the cables got disconnected from the modem or because of some similar problem. Very frequently this is how things look like round here. 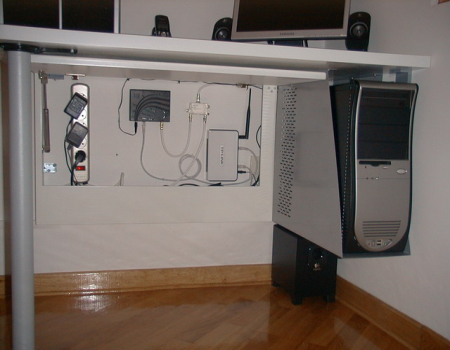 What was exactly my intervention here?

The color of the wall is white, so I decided to create a so-called cupboard out of MDF (medium density fiberboard), whose color was transformed by polyurethane to white. I also placed a shock absorber on the door so that it can be more easily lifted up.
The case frame was made out of a steel plate, previously perforated and plasticized using grey plastic material (the color is the same as the color of the table's leg).
Extension cords, modems, adapters and everything else is attached to the back of the box. Computer cables were left to be long enough so that the computer case can be taken out and lowered down to the floor to be serviced when needed. There are holes left on the side of the hanging case frame to enable the air circulation and cooling of the computer's case. 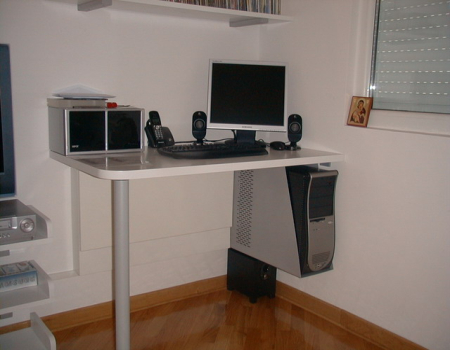 The final appearance of the computer table, after completing the aesthetic mounting. 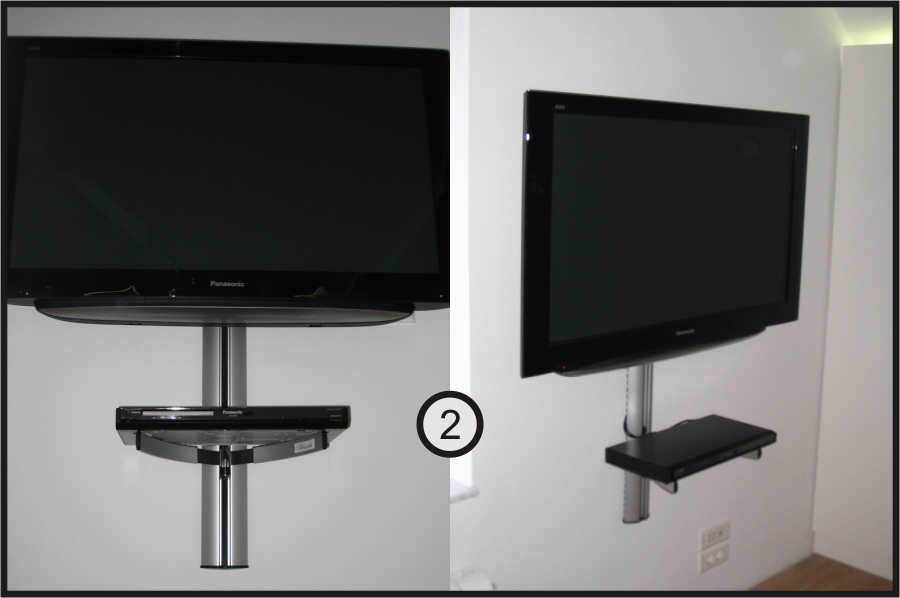 The pictures show a plasma TV and a DVD device placed on the wall with the help of Vogel's bracket. The plasma TV can be moved 60 cm from the wall and turned to the left and right (+/- 45') as well as upwards and downwards (+/- 15'). The DVD device can be lifted up and lowered down along the entire length of the DVD bracket by pressing the corresponding button.
When doing the projects for micro locations it is very important to establish where to leave the proper space for fittings (cables and boxes) during the rough construction works stage.
The fittings should be placed under the lid of the bracket. 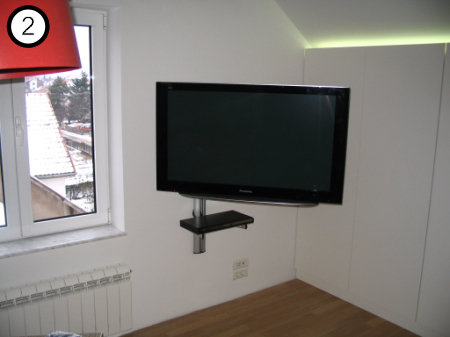 This is the view of one of possible movements of the bracket.

In the room above the preparation was done during the rough construction works stage, and the carpenter made a shelf after my drawings. The back of the shelf was drawn in, leaving the space for a wooden container with enough room for hiding the extension cord, modem, adapter and other devices. This way, the shelf can go all the way to the wall. The cables were put into appropriate braided sleevings, which can be ordered in many different colors and dimensions. The cables are made and cut to fit the measurements.
The walls remain clean because the vacuum cleaner was used during the drilling of holes.
BOSE ADAPTiQ calibration of the audio system at 5 most likely listening positions was done after the assembling works, which enables the ultimate audio quality without any distortions, noise and reverberations. All TV and radio channels were also programmed respecting the order of channels requested by the client. 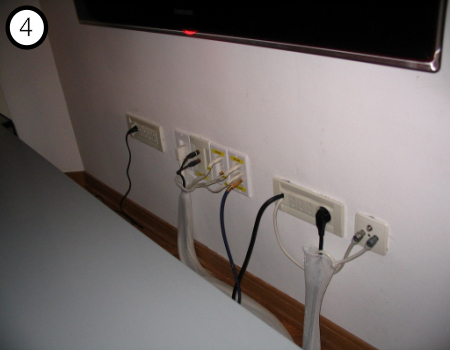 This intervention was done at the location where the fittings had already been placed before I met the client. The architect, not knowing the future placement of the devices, had made a project with too many modules / sockets, which were all very different from one another and too expensive. When the cables of devices are connected, cables end up in complete mess. The solution for this case is shown and described in the example number 3. All cables should be gathered in one box, and from there a braided sleeving directs the cables to their individual destinations. 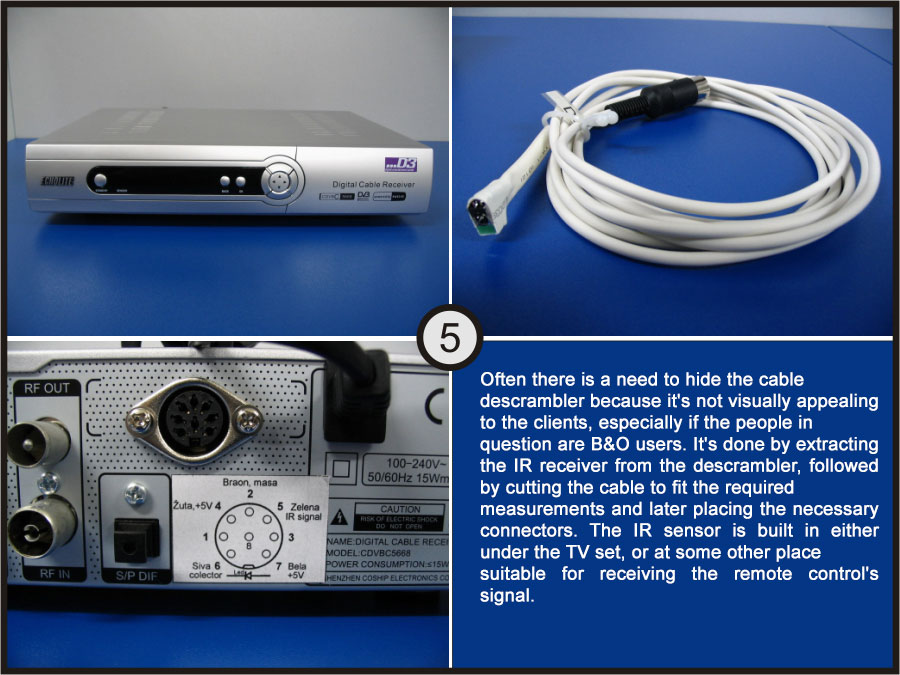 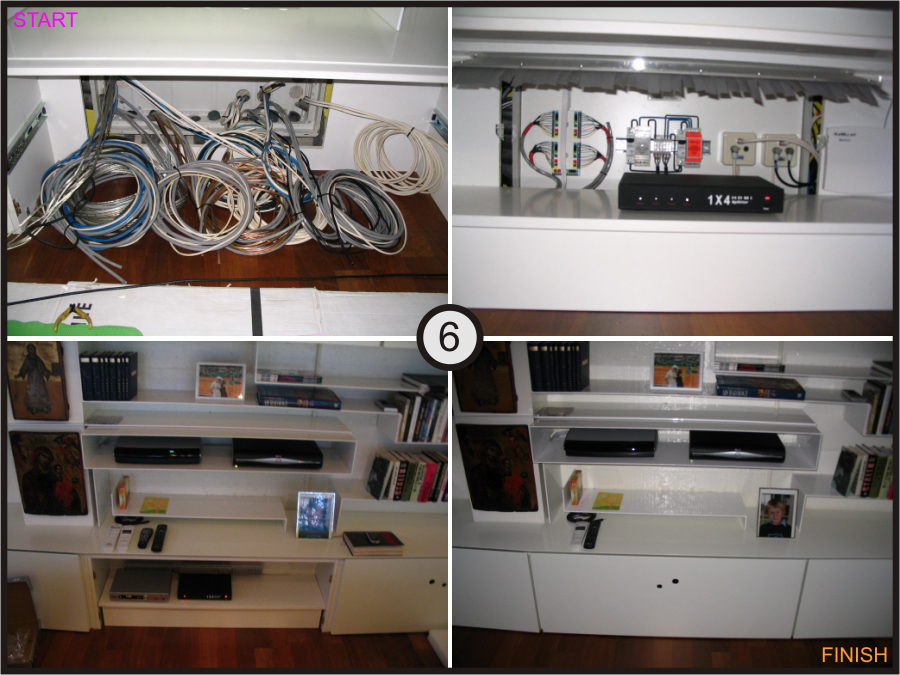 The picture called "START" shows many cables, and the other 3 pictures show how it all turned out after the intervention. The cables were adjusted to fit the measurements and the connectors were placed at the spot. Two surge protection devices were built in to provide the protection of electronic devices (more information on surge protection can be found on HOME page).
Decorative boxes were made out of melamine chipboard, while the lids were made out of plexiglass to serve the purpose of establishing better organization and making everything more decorative. The aim was also to make the right kind of harmony between electronic devices and home decoration.

If you want to see more similar examples, visit the gallery.